'Where The River Runs Gold' - a forest of creative responses

Since publication of  Where The River Runs Gold in July 2019 I have been overwhelmed by the creativity that it's brought forth. From the beautiful window displays by Waterstones stores to the incredible creations by students, librarians and teachers at festivals and in classrooms.

I have been asked to put together a sample pallette of activity inspired by the book.


I hope this selection of  creative responses inspires readers and to feel empowered to make a difference to improving their own environments.

Shifa and Themba, the brave, bold and true young protagonists of my story, are right there with you. Warning! Once you enter the story hive the creative potential for reading, writing and art for pleasure are endless and can be far-reaching... 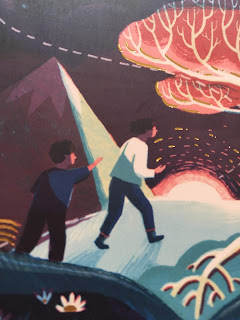 Bee hives set up
Banners made
School Environmental Manifestos drawn up
Seeds scattered in window boxes, gardens, allotments, railtracks, unused land and meadows
Seed packets made and used daily
For every Graffitree created in school a tree has been planted. 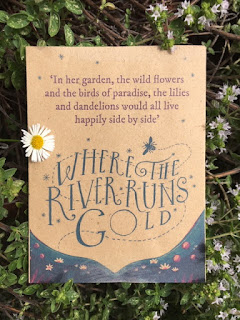 'What Shifa loved most about the path between the warehouse and the Orbitol Bridge was that the street clearers could never keep speed with the pace at which the weeds and wildflowers grew between the cracks. There was always traces of green shoots growing among the crumbling buildings.'
Page 23 Where The River Runs Gold 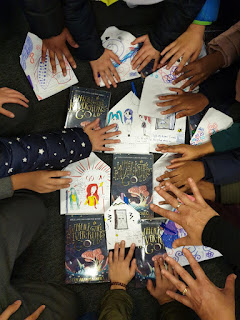 Origami seed packet making is catching on.... these decorated with scenes from the story 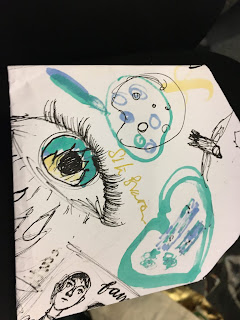 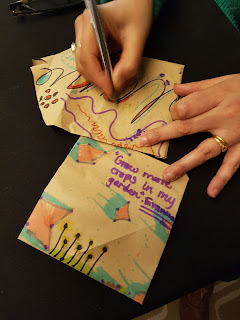 'From one random page she'd learned how to make a flower shaped origami envelope out of scraps of paper, When she squeezed the top the flower head opened like a mouth allowing her to place her precious seed finds inside.'
Page 57 Where The River Runs Gold 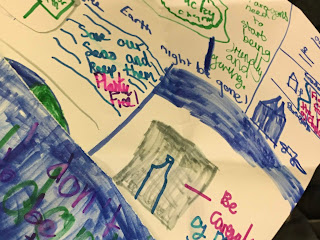 Trees are springing up everywhere ... I'm hoping to collect them together to form the
Where The River Runs Gold Graffitree Forest.

'Shifa thought she understood why the artists took the risk of breaking ARK Law. These trees took up space and could be enjoyed by everyone. Except for the private parks and gardens of the paragons where her papa worked, it was ARK policy that all other land in Kairos City be turned into housing compounds or Freedom Fields allotments to grow food.'
Page 20 Where The River Runs Gold


Shifa had heard about an underground movement of artists breaking ARK Law by painting trees, flowers, plants and bees on walls all over the city.'
Page 19 Where The River Runs Gold 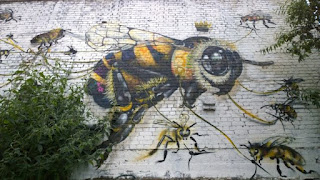 'Nabil and Lottie dropped a rainbow-coloured sheet over the ledge; on it, in deep blue paint, were written four enormous words.
DARE
DREAM
BELIEVE
IMAGINE
Pg 94 'Where The River Runs Gold' 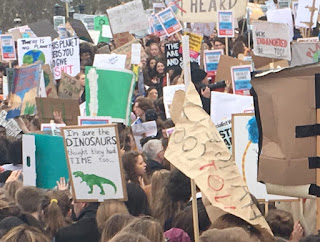 Banner making.... The first banner was created by Friday For Futures Campaigners and since then many banners have been made, some of which have been carried on marches by young people and others displayed in schools. Students respond powerfully to the urgency of the environmental call for action in the book as in the real world they are inspired by the bravery of young activists like Greta Thunberg and Maya Rose Craig in villages, towns and cities all around the globe.

Shifa and Themba escape some of the harsh realities of their world  by creating a safe storytelling haven. Students have started creating such spaces in classrooms and around the school inspired by their own beautiful imagined landscapes from stories or their own lives.


'Here they had read contraband pages that they had discovered in unlikely places around the city, and with these finds their story hive had expanded into wild deserts, alien planets, raging rivers, bird and butterfly aviaries, the tallest snow capped mountain ranges and the sweetest flowering meadows  - a world away from the rules and regulations of Freedom Fields.'
Pg 57 Where The River Runs Gold

A skep is a small hand woven bee hive....

In Where The River Runs Gold Shifa and Themba and other 'Outlanders' make the 'skep-heart' signal as part of a secret language. Readers have enjoyed inventing their own secret languages.

Where The River Runs Gold:
Longlisted for Blue Peter Book Award
Nominated for Carnegie
Waterstones Book of the Month ( July)
Times Book of the Week
https://www.thetimes.co.uk/article/childrens-book-of-the-week-where-the-river-runs-gold-by-sita-brahmachari-8q0kslsn9


Posted by Sita Brahmachari at 11:34 No comments: