Diary of an inspirational day at Seven Stories 'Where Your Wings Were'  Exhibition launch.
28th June 2018.

David Almond is quite simply one of my inspirations as a writer.  So when Sarah Lawrance Collection and Exhibitions Director at Seven Stories invited me to be in conversation with him about his work at the launch of his exhibition 'Where Your Wings Were,' it was not a hard decision to accept! 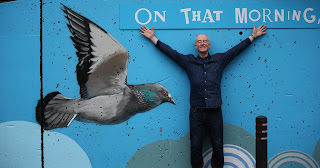 ON THAT MORNING....I arrived in Newcastle to blistering sunshine and walked along the Quayside to Seven Stories. The beautiful tidal Tyne with its monumental bridges was all of a glitter.  On the opposite bank I read a sign that said 'Go with the Flow/ Swim Against The Tide'...

I thought about the last time I'd met David at The Hay Festival and he had spoken about a seam that ran through all his stories; the power of the imagination and creativity to harness the passion of youth and  help young people grow...

'We need to break away from narrow notions of learning into something more tender, more creative, more complex that explores the strangeness of the human heart, that explores the real world and real objects and the mystery of them.'

I thought about my own journey as a writer and my own children and how important it has been for them to swim against the tide and find their own creative hearts. One of things I have always loved about David's work is it's rootedness in the North of England. In my early childhood we lived in Hull and The Lake District where my mum's family come from and the landscapes of Almond's work speak deeply in me to a place of awe and wonder at the power of the natural world and how we as human connect and impact on it through our imaginations and industry.

As I walked past a foundry workshop I was struck by the art on the underside of a red brick arch...I was later to discover that this beautiful work is just one of the extraordinary exhibits that forms part of the ' Winged Tales of  The North' art trail  commissioned by Seven Stories from David Almond (words) and Kate Drummond (Visual artist) inspired by David Almond's work. It's a stunning exploration of how an imagination is formed from the landscapes out of which it grows...and it takes you  through the Ouseburn Valley as part of Newcastle's Great Exhibition of The North ....

Staring up at the beautiful owl and kingfisher - much loved birds and powerful symbols in my own stories, I felt a huge sense of anticipation and also considerable nerves!

Prior to the interview I was lucky enough to tour the ' Where Your Wings Were' exhibition with David as he shared with me the experience of moving through his own work ... that what he appreciated is the space in the viewer's imagination the exhibition allowed for visitors to imagine and dream for themselves.

It's this space in Almond's work that I most appreciate.

In keeping with this idea, the exhibition space allows you to fly around it in any way you wish.  You feel as light as a bird on entering the gallery ...where dreams and imaginings of wings greet you at the door and invite you in.

I chose to enter across a wide expanse to a hypnotic vision of a murmuration of starlings. There is space here to sit or lie and take in the wonder and mystery of this vision of nature, a constant theme in Almond's work. All his stories hold something of this hypnotic power and energy.

After the epic contemplation of the large sky screen I bobbed around smaller more personal spaces of exploration inviting the viewer to settle and peck about! I peered into light boxes containing flames tilting and growing, leaned over the edge of a bridge where the surging energy of  the river feels like it's running  through you. 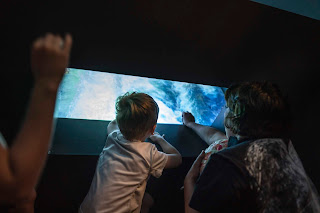 These immersive spaces are hard to leave just as these symbols settle on the mind of a writer and recur in stories...writing themselves into your work... owls, wings, stones, pits, rivers, dreams of flying...

The viewer is invited to lose themselves in these epic natural forces and also to find themselves reflected and refracted in them. Finally pulled away from the power of the weir I came face to face with myself in a reflecting lens where faces and figures distort producing ghosts and monsters. I placed  my hand in a tangled web and nest and found another's hand reaching mine from another realm!

Later in the day David and I would talk about  monsters, fear, angels and flight in his work and they were all here in this exhibition.

At the end of this exploration of self and nature I was invited to write my own fears on an enormous chalk board... once those fears are voiced they too fly around the space.Here is an invition for everyone to experience the power of writing and stories. 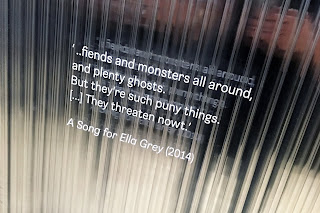 After writing on the chalk board I wandered into a walkway of Almond's beautiful illustrated notebooks revealing what Almond calls  'the messiness' and the meandering nature of storytelling (although his notebooks are creations of layered beauty). Anyone interested in the creative process will want perching tim in front of each of these notebooks! 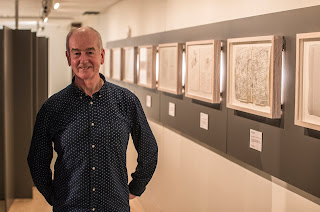 After prizing myself away from the notebooks I discovered on a far wall the iconography of an author's childhood. His learning of the Catholic catechism, his songs of an altar boy which gave him a love of the rhythm of his voice and the mysterious power of words. His own writing inspirations discovered in the Felling Library.  From these powerful objects of childhood  I was pulled away by children's recorded gasps and laughter as they engaged with Almond's stories. On a large screen  images mutated from Almond's work, I saw Skellig's Wings, Mina's tree, A dark pit of 'Kit's Wilderness', a reeling press from 'Heaven Eyes', a wide open tide where the teens of ' A Song for Ella Grey' escaped to... 'The Colour of the Sun,' sea and river creature, stones...a mountain tarn in the Lake District where I sang as a child. Almond's images mutate and are transformed by the watcher to enter their own wild landscape of the imagination.. the power of stories and the ancient human instinct to tell them flies with you out of this gallery .

In the foyer we met some 'young producers' who helped to create the ideas and elements for the Art Trail inspired by Almond's work. 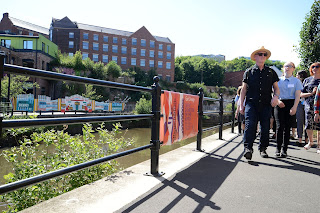 We walked along the Ouseburn Valley together beginning with the owls and kingfishers that I had already discovered flying under the arches. We moved on to a mythophone, (perhaps the writer's ear?) distilling Almond's voices and stories, past the pigeon crees, along the canal where a derelict old den could have easily produced a skellig... From there we trailed under a railway bridge where we dared a group incantation ..'Essalamus.' Three times we spoke the word we were warned would lead us into peril... from then on we were all caught in its enchantment!  On this beautiful trail David had woven  new words dedicated to the places that have ignited his imagination in his stories.

It was hot and by the time we returned to Seven Stories I was beginning to feel nervous. The exhibition and the art trail had managed to capture the essence of Almond's magical passionate world so beautifully and following a viewing of the exhibition an audience were gathering to hear him speak about his life's work.

In inteviews questions can be the barred way or the open gate that let's you find a way in to speak about the walled gardens and the wildernesses of the writer's mind...

Collection and Exhibitions director Sarah Lawrance  gave me an excellent tip ... make it a conversation between authors....so i did. I asked David the questions that fly up in me when I read his work .Questions about landscape, his own childhood, about his engagement with monsters as well as angels, his capturing of voice, and he read from  his beautiful most recent novel 'The Colour of The Sun'... and we got lost in the flight and flow of conversation! To hear David read his work to an audience including his own siblings was a truly moving experience. All that was left to do was thank David for sharing his mind, imagination and humanity with generations of people throughout the world through his books, films. radio plays and now through this extraordinary exhibition. I'm sure this exhibition will tour far and wide but you will never feel it's power as truly as in the place it grew.

If you do one thing this summer try to get to Seven Stories to see this exhibition. It will  reveal to you the ways that an imaginations grows, flows, flies and roots itself in the song and sway of the written word where it finds lodging for a tide and time... until a page is turned and it takes flight again in the reader's mind.

The next morning as I walked along the Quayside thinking about the creative writing workshop I was to hold that morning.... I was overwhelmed by the beauty of the sun dancing on the Tyne  and of the glittering presence of wings and light floating in and out on the tide of all our imaginations.

P.S.  I am not sure what this means! When I visited The Lake District for my cousin's wedding recently I had a little present from a pigeon deposited on my shoulder! It came seemingly out of a bright blue sky... I made my cousins laugh by instantly thanking my Dad... (the kingfisher, his favourite bird). Walking under the Tyne bridge into Newcastle... you guessed it... the same deposit on the same shoulder... well not exactly the same. I was informed that in all probability the bird that had left its present was the rare and raucous sea bird the... Kittiwake... I flew back to my nest with two new words ... Kittiwake and Cree!

Thank you Seven Stories for the invitation and this meeting of minds, hearts and wings! Now back to the chalk board.... 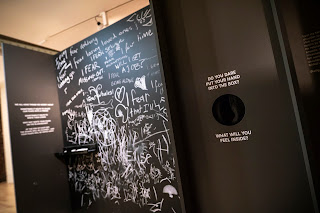