'Corey's Rock' 'What! The real Jane Ray's illustrations in my book!' 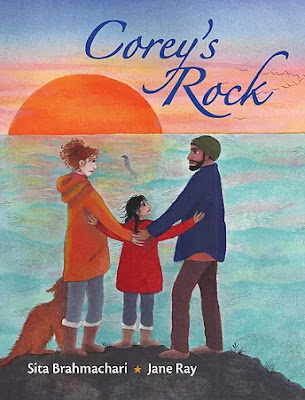 CLPE Books of the year https://clpe.org.uk/library/booklists/clpe-staff-picks-2018 selected by Ann Lazim -…A beautiful collaboration between an author and illustrator which brings together themes of loss and new beginnings, friendship and cultural heritage.


'What makes Corey’s Rock quite so special? Let me count the ways:
First, we have the spiraling poetic language that gently, but insistently, nudges its characters onward, reverberating with the recent past as it echoes across the book, so that Isla and her parents edge gently forward, drawing closer to something like acceptance, something like recovery, and then something that we might tentatively describe as happiness.


Then we have the illustrations. Illustrations that work with and around that poetic language. If you are interested in picturebook codes, there is so much to linger on here.  From the stunning cover, to the profoundly telling endpapers, and then slowly through the careful use of picture, symbol and space, this is an especially crafted, especially beautiful dance of word and image.'
(Just Imagine)

'Brahmachari always writes with tenderness and awareness about how global and personal difficulties affect children, and Jane Ray’s soft wash illustrations hold the space beautifully for this quiet story of transformation and healing.'
Book Trust ( Books we love)

'A scintillating read for children who can wholly identify with the feeling of being displaced.'
(Read it Daddy Blog)

'A treasure of a book that deserves a wide audience.' Jill Bennett (Red Reading Hub)


'A Magical tale that will bring comfort to its young readers.' Sarah Crossan


'Sita Brahmachari’s words and Jane Ray’s illustrations weave a heartfelt tale of longing and belonging, threaded with the magic of a selkie story. Set against the blue-green sea and sky of Orkney, Corey’s Rock is a story of grief and loss, but also one of light and hope, and ultimately love. A book to be read and read again.'t  Gill Lewis
'A beautiful book.I love the way the narrative flows so effortlessly between dream, myth and realism.It’s challenging without feeling overtly so. Corey's Rock is a doorway to poetry and mysticism.' Cheryl Moskowitz

The evolution of a rich collaboration...

It is such a joy to have worked with the wonderful Jane Ray on this our second story together. Our first was 'Worry Angels' for Barrington Stoke (2017) which shares a narrative of the power of art and creativity to heal and transform.

I wrote 'Corey's Rock'!  four years ago after reading an article about a family coming to terms with the death of their first child,born with a heart condition. It was something that the mother said about there being so few stories that she could read to her surviving daughter that could help them to re-build their lives as a family. Her words sent me to my desk. A story emerged, image by image. I found the family on a Scottish island, on a wide open beach. In my mind's eye Isla looked out to sea and saw a seal and begins to weave her love of the selkie myth together with having to come to terms with the loss of Corey..she  collages myth and her love of the natural world to navigate her way in her new home and reality. In tone and style it was close to my work in theatre and the poetic co-adaptation of Shaun Tan's 'The Arrival.' As I wrote I felt it needed to be a work of image and word, that it cried out to be fully illustrated.
I think in pictures and it has been a total joy and honour to see the world of my story illustrated with Jane Ray's beautiful brush strokes. So much so that when I saw her imagery for the first time I burst into tears! To see your words and world visualised with so much care, tenderness, mystery, beauty and magic must be a highlight of any author's career.

Jane Ray and I were first introduced by Kate Agnew then owner of The Children's Book Shop Muswell Hill who said that she would love to see us collaborate. I was both excited and in awe of the idea. Shortly afterwards Jane and I worked on the wonderful Pop Up Festival where we both created installations around our stories (Jane with unicorns, me with kites and owls for 'Kite Spirit'). We travelled together and were amused by how many feathers and quiltish things we carried with us! We found we did indeed have much in common.

Shortly after, Jane invited me to work with her at The Islington Centre for Refugees and Migrants where we have run an art and writing class together for the last three years.
https://islingtoncentre.co.uk/


Taking 'Corey's Rock' out of the drawer

One day I plucked up courage to show Jane 'Corey's Rock' and was overwhelmed by her response to it.

‘When Sita showed me her story ‘Corey’s Rock’, I was immediately entranced. I have always loved Selkie stories and have drawn on them for other books, such as ‘Can You Catch a Mermaid?’ (Orchard Books) and ‘Ahmed and the feather Girl’ (Frances Lincoln) The idea of a beautiful wild creature transformed, and torn between two worlds, is a powerful one, which resonates at many levels. Sita’s lyrical writing moved me and filled my head with pictures. These are always the best stories to work on – the ones where I can ‘see’ the illustrations immediately, not necessarily as individual pictures, but as a feeling, an atmosphere. I am very excited by Sita’s lyrical prose. Already I can see the soft greys and greens of the Scottish Isle sea-scapes blossoming into warmer colour as the characters in the story begin the process of healing and adapting after their loss.' 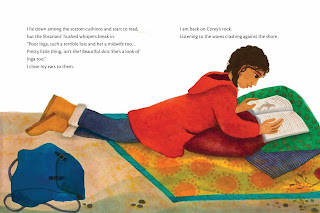 Flow between image and word


These are pictures of a diverse family in rural landscapes that remind me of those my family grew from but the like of which I never saw in pictures when I was a child. I had no idea how much I have longed to see them. I hope that they speak to children as powerfully as they speak to me.

The novella is now arriving in the shops. Jane and I met to celebrate the story and in the quiet of her beautiful garden she gifted me this exquisite painting of Isla in her dream world. 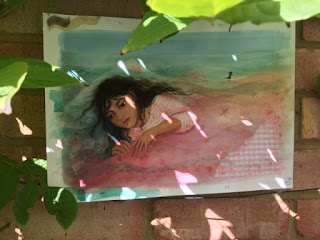 This speaks to me not only of Isla's story but of the transformative power of dreams and storytelling that is the force that drives so many of us children's authors and illustrators.

This refrain runs through Isla's mind throughout the story...

'Wrap yourself in selkie skin, listen to the call within.'

I hope that this will be a story that will find readers snuggled on a sofa, or lying on the scatter cushions of a wonderful library, as Isla does. I delight in the idea of a child opening the book and finding in the wide horizon... an invitation to enter. Children need space and an invitation to belong in landscape only then will they begin to make their own marks on a page, and bring of themselves to be readers and writers of stories.

This is a book I will personally treasure. I still have to pinch myself to believe it's really here!


We are so proud that Amnesty International have endorsed this book as a story that speaks to the values of family, friends, home, safety and refuge.

With huge thanks to the wonderful publisher and champion of a diverse world of children's books Janetta Otter-Barry and the whole team at Otter-Barry Books, agents Sophie Gorell  Barnes of MBA Literary Agents and  Hilary Delamere for being so passionate about this story...

Festivals, Assemblies, Residencies and Workshops
Using a beautiful animated film Sita and Jane have developed a range of creative and immersive talks and workshops offering insight into how an author and illustrator work together. Participants are invited to explore the beautiful, deep and wild imagination of the selkie tale of ‘Corey’s Rock.' Using the film as a backdrop, participants will be immersed in the sounds and sights of the natural world of the novel. Activities include elements of improvisation, landscape painting and sensory poetic writing on the theme of the transformative power of the imagination. Suitable for children aged 8 - 11.

Also by Sita and Jane

To read more about the vital work of Islington Centre for Refugees and Migrants and how you can support:

Depictions of diverse representation in the British Countryside
http://booksforkeeps.co.uk/issue/229/childrens-books/articles/beyond-the-secret-garden-england%E2%80%99s-white-and-pleasant-land

To read more about the vital work of Islington Centre for Refugees and Migrants and how you can support:
https://islingtoncentre.co.uk/our-clients-work/

Posted by Sita Brahmachari at 10:19 3 comments: