"We were delighted with Sita’s presentation to Year 7 in assembly.  She talked about writing, and how she had really started thinking about themes for her books when she was a young teenager – like the students she was talking to.  She talked about her experience of India, and asked the students how many of them had family from, or living in, other countries. She drew out many themes of history and a sense of place. She spoke of her father’s life, coming from Calcutta to Britain as a medical student.  Sita’s mother is English, and she grew up in the Lake District.  She talked about her love of photography, and used the large screen to show the photos of Calcutta that later inspired scenes in the book – such as the photo of the building that then became the old family home in Jasmine Skies.  She read this extract from the book. 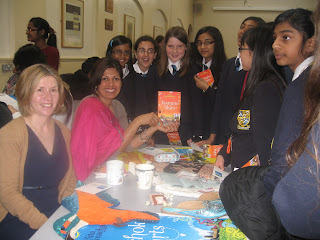 The highlight of the session was probably the beautiful Indian bag full of objects, which she passed round the students, and the illustration of walking in someone else’s shoes, when she swopped shoes one of the boys – Sita in his lace ups, while he had some lovely Indian slippers. The students enjoyed this very much. This illustrated that we need to “walk in the character’s shoes” when writing imaginatively."  Miranda Mc Allister, Librarian Latymer School.
In order of school visits from March 2012....
Alexandra Park School, Haringey, London.
Heartland's High, Haringey, London.
Wood Green Library, Haringey, London.
Marcus Garvey Library, Haringey, London. 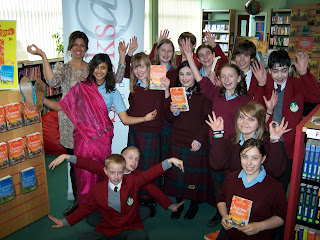 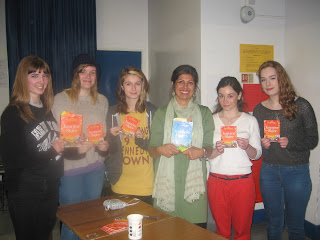