In the 'No Rules Handbook For Writers' by Lisa Goldman (Oberon Books 2012) in which Lisa interviewed me about my process of writing 'Artichoke Hearts' I was fascinated to read other authors talking about their creative research process. The wonderful writer Philip Ridley talks about how important photography is for his creative development of story. In an interview with Linda Goodman he explains...

'I've been taking photographs since I was about fifteen. I always walk around with a camera on me. I use the camera as a kind of sketch book . I take photographs of anything that catches my eye. there's no direction or plan to it; the texture of some brickwork, a crowd of people, an interesting cloud...'

In the build up of launching 'Jasmine Skies' my second novel I shared with readers a collage of photographs of Kolkata that I kept by my desk as I wrote. Now as 'Kite Spirit' is about to be launched I have been taking the inspirational photos off my writing wall and placing them in my scrap book. As I look at them all laid out I can see how much they have inspired ideas, descriptions of landscape and moments in the story. I thought I would share some of them with you.

'Kite Spirit' is a book about flying and falling and learning to fly again. Here is Cat the Circus Artist on her way up to the Cloud Swing. Cat inspired the character of Annalisa Pain in 'Kite Spirit'. This photograph was taken at The Circus Space in London where Kite trains in my story. 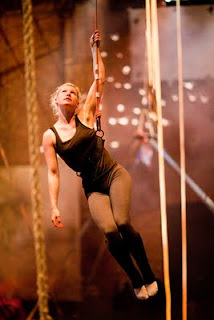 Who doesn't dream of flying?
Photography by Barry Lewis


As I write I have a colour in mind for each of my books.. and the moss green in this photo is the colour I held in my mind as I wrote 'Kite Spirit'. 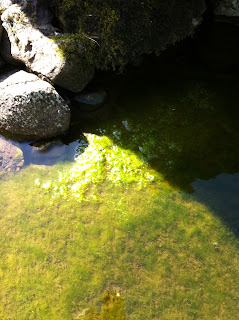 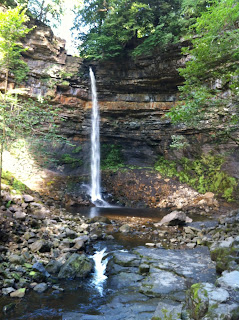 Under the panels of glass gushed the waterfall that seemed to mirror light backwards and forward off the building. She supposed that’s why it was called Mirror Falls. The name was fitting, Kite thought as she glanced around the glass building; the mirror that Dawn and Kite had so often been reflected in together had fallen, shattered into a million pieces.
Kite looked down through the glass stepping stones, and on the third panel she took a step backwards on to the firm stone. Under this transparent panel, one step away from her, the sheep carcass was clearly visible. She stared at the water rushing through the skeleton. With or without the grim carcass there would never be anything peaceful about this place because it would always be moving beneath her feet. 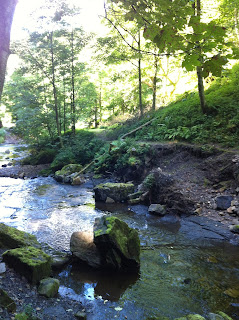 'Kite came to a rock large enough to sit on, climbed up and stared into a deep pool of water. Tiny golden fish gathered in its mossy depths, glistening in the sun, like millions of coloured pixels. Then suddenly they were shoaling together, gathering into a shape she recognized as Dawn’s face. The image of her friend was so accurate Kite felt she could reach out and touch her fine auburn hair as it floated under the water. Her face shone white and clear, and she smiled her gentle smile at Kite with her soft hazel eyes that reflected colours off the moss beneath her. Kite held her breath. Her heart raced with pure joy to see Dawn again so close, and this must be what Dawn wanted too, to find a way of explaining what had happened. She reached out to her, down into the water, and the hundreds of tiny fish scattered in every direction, making her stumble backwards as a long shadow fell across the empty pool.' 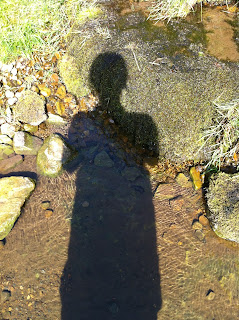 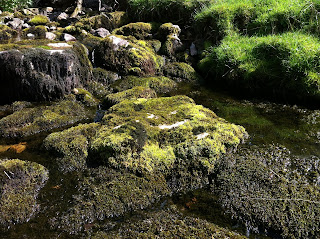 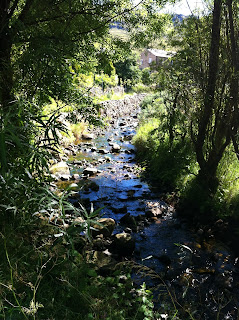 Garth picked one stone off the little dam and held his hand out to Kite as if to say, your turn.
They removed a stone each until the tiniest ripple of water began to flow between the remaining carefully placed stones. 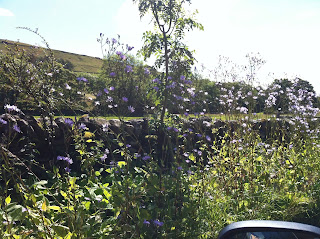 The whole garden swayed as flower heads dislodged themselves, flew through the air and finally settled on the ground like confetti. The tiny blue door was open and bashed noisily against its post. Bardsey barked and sprang ahead of them as he spied Agnes, her grey hair flying in the wind. She was cradling something in her arms like a baby. 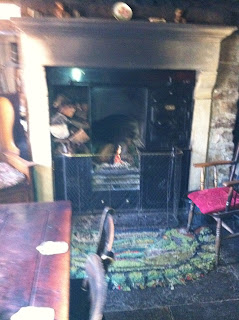 The Carrec Arms was a limewashed stone building positioned in the middle of a hamlet of tiny cottages. On an ancient stone lintel above the pub’s low doorway was the date (1606) in Roman numerals. Seth ducked and went through. Inside there was only a single room, with a bar at the far end. Even the colours of the place, bathed in soft amber light, seemed to soothe. There was nothing bright or dazzling or new here. The beams were dark oak, all gnarled and knotted. Copper and silver pennies had been wedged into the gaps between the beams. 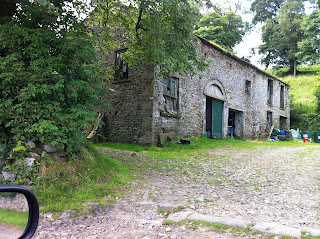 Agnes led the way down the pebble path, through the gate and out towards the barn. As she opened the enormous solid wooden door she stumbled backwards and Kite placed a steadying hand on her back. The wind streamed in, wafting hay and straw into a dust storm. It took all of Kite’s strength to push the great door closed behind them. 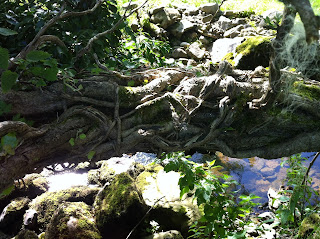 Seth looked up and tapped the newspaper – the Cumbrian and Westmorland Herald. ‘I’ve been reading all about your commission from the National Trust!’ He smiled at them both. ‘Seems like Garth’s garths are going to be all over the walkways of the Lakes! It says here your work is . . .’ Seth put on his best Radio 4 accent, ‘“A meditation on the erosion of time . . .”’
‘Really! I didn’t know that!’ Garth laughed, then picked up the paper and read it for himself. ‘Makes me
sound good! 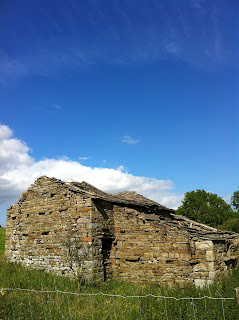 Kite stared up at the familiar uninterrupted blue sky and wished for a great wind to scud across, bringing

racing clouds of grey and charcoal. 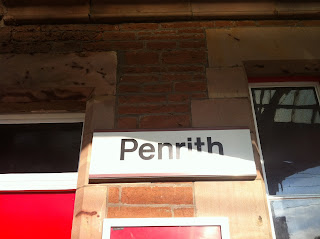 Garth was standing on the snowy station waiting for her. Bardsey sat faithfully beside him. It was comical how their heads scanned the platform in the same direction, searching for her. Garth was wearing a serious-looking padded Parker. He looked taller and broader in the shoulders and back, but maybe it was down to the layers he was wearing against the cold. Kite threw on the over sized sheepskin jacket that Seth had allowed her to pinch off him. As soon as she stepped off the train she was greeted by a loud bark and Bardsey bounded towards her, leaping at her as if he’d been waiting all this time for her to come back. Kite laughed and brushed the snow from her clothes.

There are more photos in my 'Kite Spirit' album, but I hope that you will enjoy picturing them in your mind's eyes as you read the book...

All excerpts are taken from 'Kite Spirit' by Sita Brahmachari  published by Macmillan Children's Books on 25th April 2013.

Posted by Sita Brahmachari at 10:25