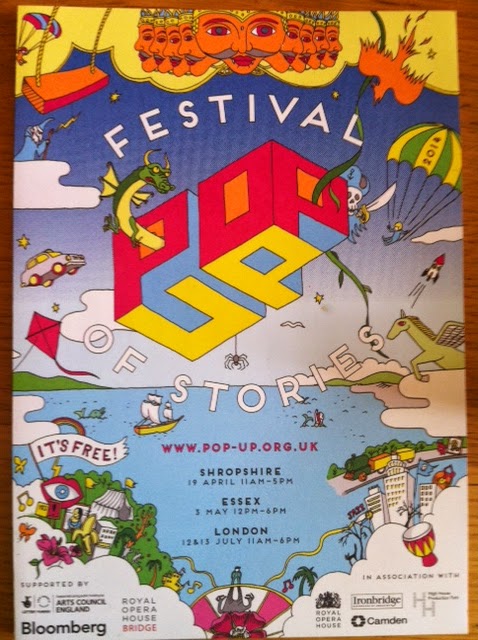 I have long admired the creative work of the Pop Up Festival in inspiring children, young adults and their families to explore the world of stories and stoytelling. I held a creative writing workshop on ‘Artichoke Hearts’ at the festival in London a few years ago and I took along my daughter and friends. We had the best family day out…

We talked to favourite writers, worked with illustrators, got caught up in a fiesta and saw a book turned into theatre. We even had a ‘Book Doctor’ appointment with Julia Eccleshare, Children’s Editor of the Guardian, to help us find out new authors we might like to read.  At the end of the day my nine year old described the experience as ‘being like walking inside books’.

So when the festival director Dylan Calder invited me to create one of my own projects for this year’s festival I was really excited. I had recently published my third novel, ‘Kite Spirit’ and decided that the book’s themes - the power of art, the imagination and inspiring landscapes  - would be a good fit for the festival. I have a character in 'Kite Spirit' called 'Garth' who ' just finds stuff in the landscape' and makes sculptures out of them... he lets his imagination have free reign. The storyteller's imagination through pictures and words was to be my starting point.

Then I wondered which other artists (outside of the fictional world of my book!) I might find to collaborate with. I remembered walking into an editorial meeting for ‘Kite Spirit’ in a community café called ‘Drink,Shop, Do!’ in London's Kings Cross, looking up and seeing Kite’s everywhere. I even took a photo of one...


At the time my editor laughed at this ‘spooky’coincidence (I have a reputation for them!) but I see it as my job as a writer to follow random trails and so, as a long shot, at least 6 months after my editorial meeting, I returned to the café. The kites had long flown but I was still hopeful as there was now an exhibition of origami birds. I mentioned the kite exhibition to a waitress and... as if my magic...she gave me the number of the kite maker… who turned out to be Grace Manning, an artist and final year student at Central St Martin’s School of Art and Design. Grace is, as her name suggests…. AMAZING!

Once I plucked up the courage to call her with my somewhat random request she asked me to send her a copy of ‘Kite Spirit.’ I thought… so far so good… as I always say to my children… there’s no harm in asking!  A few days later she sent this message back to me….

‘To say I enjoyed reading ‘Kite Spirit’ would be an understatement.It was beautiful and a lovely balance of poetic visuals and charming narrative, I loved it. Yes! I would love to create a walk in landscape for your book!’ 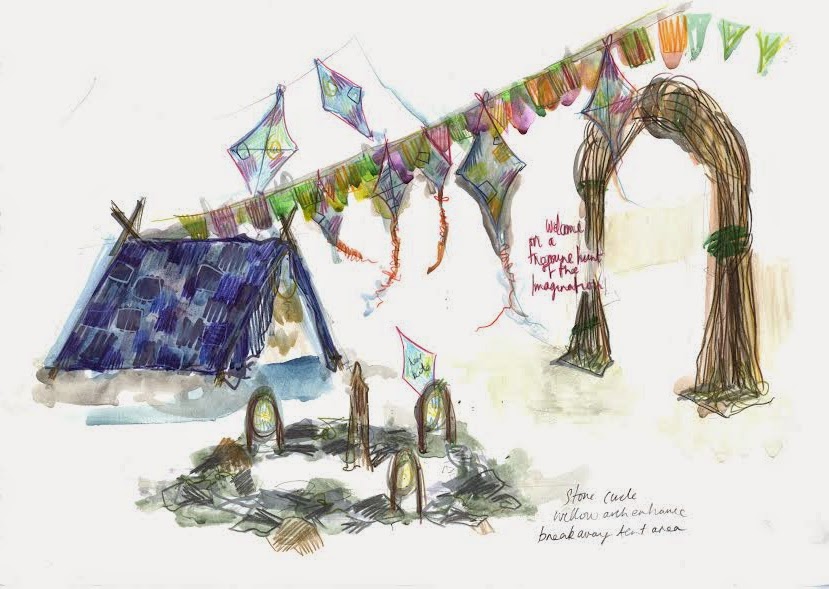 Then the creative fun began…Having worked in theatre I already knew how much I love working with designers. I showed Grace the kite that my lovely friend Sarah Owen had made for me and Grace agreed that the colours of Sarah’s Kite should form her colour palate. She went away to imagine, draw, research and experiment with materials and colours…. 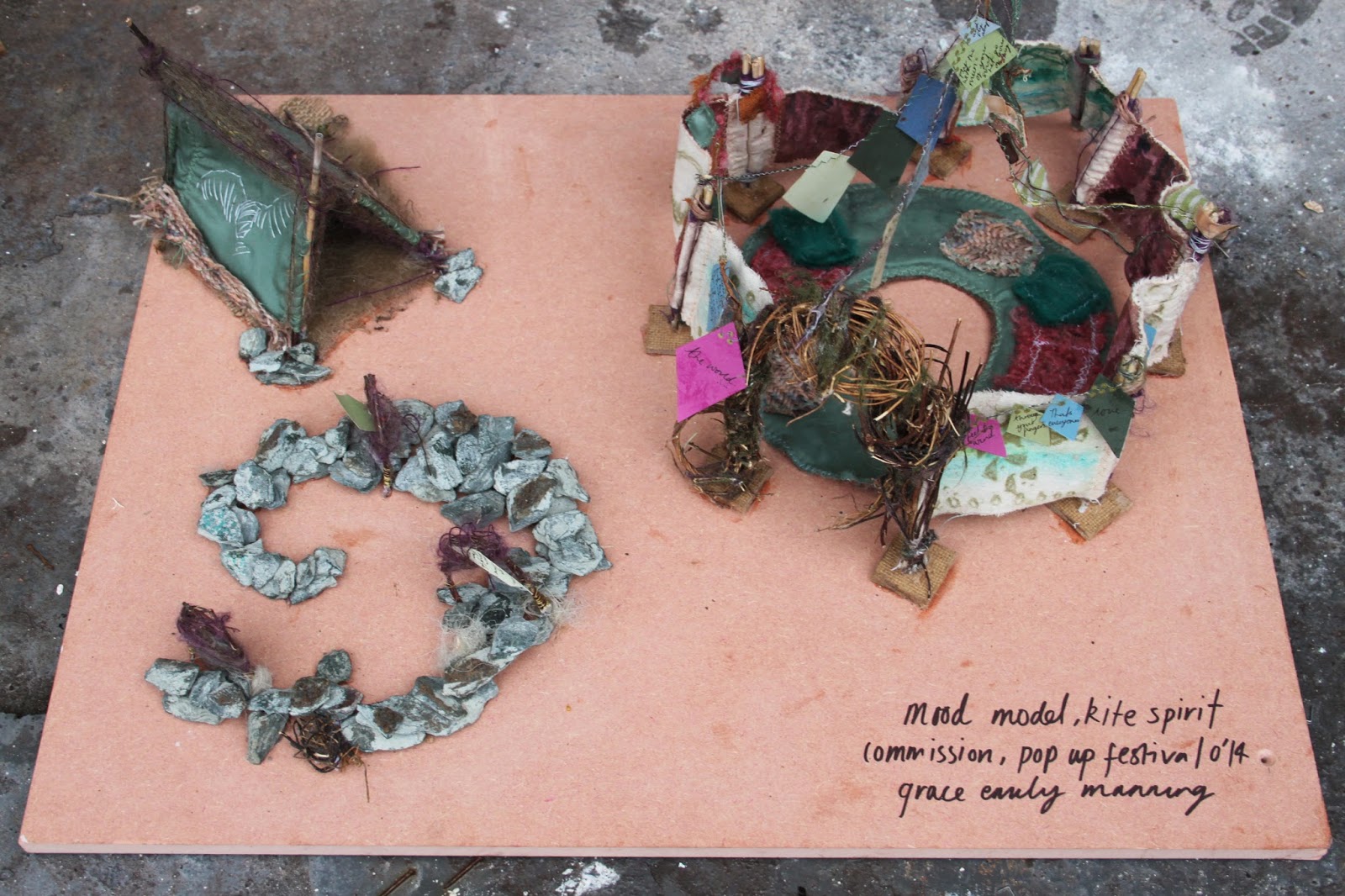 In the mean time I had been working on a short film that is central to the exhibition. It’s filmed in the Lake District by Camera man Shaun Cobley and stars a talented young actor and dancer Lily Armah in the role of Kite. The senior oboist of the English National Opera Ruth Bolister, plays the oboe music that haunts Kite throughout the story. To my delight actress Juliet Stevenson who reads the audio book of ‘Kite Spirit,’ agreed to narrate the story in the film too. (Here's one of the images from the film but you'll have to come to the exhibition to experience it!)


A few months later Grace appeared at my house with: ‘mood boards,’ photographs of her research in the Lake District, swatches of materials, sheep’s wool, bits of slate, stone and driftwood…when she talked about the exhibition I noticed that she kept using the word ‘patchwork,’ a word I often associate with the writing process. As Grace developed the plans and a model box I felt as my daughter had felt at our first Pop Up Festival as if Grace and I had stepped inside the book and were following trails through the landscape…this gave me the idea for creating a treasure hunt in the space as embarking on a new book is like setting off on a treasure hunt...the prize for your sometimes long and winding search… is your story.

A meeting at Pop Up followed and an introduction to the Royal Opera House Education and Community team headed by Richard Oliveri. Suddenly I realised that this kite (like one of those giant festival kites) had an amazing team of artists helping it to fly it. My project was to be led by Lesley Ford. She and her team have worked on the project tirelessly: making kites, sewing and dying cloth, painting, stencilling, embroidering running around trying to find objects that belong in the ‘Kite Spirit’ landscape. Even Grace’s parents have been roped in with the up-cycling, trawling junk shops and car boot sales!


There was only one piece of the jigsaw left to find... the writer's desk!  After a long search Grace has found a perfect writing desk with an old sewing machine that sits on a shelf  inside it. This feels to me like the final piece of treasure in this patchwork collaboration between artists, sewers and writers. Last night Grace and I were making kites ready for my school workshop in Shropshire and she told me the story of how she got hold of ‘my writing desk’ for free because the old sewing machine didn’t work any more.

It may not actually work but when you walk into the ‘Kite Spirit' experience I'm guessing that it won't be too hard to hear the hum of the old Singer sewing machine as it delights in the work of all the many wonderful sewers who have helped to create this experience.


As the tour begins in Ironbridge on Easter Saturday I look forward to meeting the artists who have helped to sew together this beautiful patchwork that goes beyond anything I could have dreamed of. When you write you sometimes discover that paths connect and themes return to you. Occasionally you find yourself stumbling across your own past journeys. 'Kite Spirit' the book was launched at the wonderful Wordsworth Book Shop in the Lake District where I was at Primary school and spent some of my earlier childhood.

It feels right to me that the first 'Kite Spirit' experience begins in Ironbridge in Shropshire where my late father was a family doctor serving generations of the communuty. My mum spent time as visiting nurse in the very museum factories around Coalbrookdale and Ironbridge where the festival takes place.

Shropshire is where I went to Secondary school and 6th form college and where I spent my teen years hanging out with my friends. So it seems that by the twists and turns of life and art my teen novel has taken me on a trail back to the landscape of my own teenage years.

Now nearly all the pieces of the patchwork landscape have come together... all we are missing is you!


Take part in a  treasure hunt through the writer’s and artist’s imagination.

Respond in writing, sculpture and images to what you see, hear, touch, feel and smell around you.

Climb inside a kite festooned tent, lit by the warming light of a camping lamp.

Listen to owls hooting or a waterfall surging and dream up your own story landscapes...

Come and join Grace and I and all the amazing storytellers who have created events in this community festival of storytelling, participation and fun...

Which other storytellers will be there?
The ‘Kite Spirit’ experience is just one of TEN experiences that you can walk straight into at the Pop Up Festival…Including fantasy author Sarwat Chadda’s Marvel Comics inspired interpretations of classic myths, told through roaming performances and monster puppets, novelist Julia Golding’s Arthurian Pavilion, featuring medieval game shows, knights, minstrels and the legendary Round Table and illustrator Jane Ray’s giant toy theatre, telling tales of mermaids, firebirds and flying horses, which children help bring to life on the day. Other highlights include Mr Big illustrator Ed Vere’s 50s era jazz joint with a cabaret line-up, whacky cocktails and compulsory dressing-up; Katie’s Picture Show creator James Mayhew’s pop-up art gallery, where giant art-works by classic artists – co-created with children and parents – come to life and Illustrator Thomas Docherty’s enormous mobile installation of an enchanted city, co-created with hundreds of children and parents who attend the Festival
( see the full list of events and authors on the festival site)

What will it cost?
Nothing! It’s as free as the imagination and as inspiring as flying a kite on the best of blue sky windy days!

Hope to see you at one of the Pop Ups!

Wishing you a very happy and creative Easter holiday,